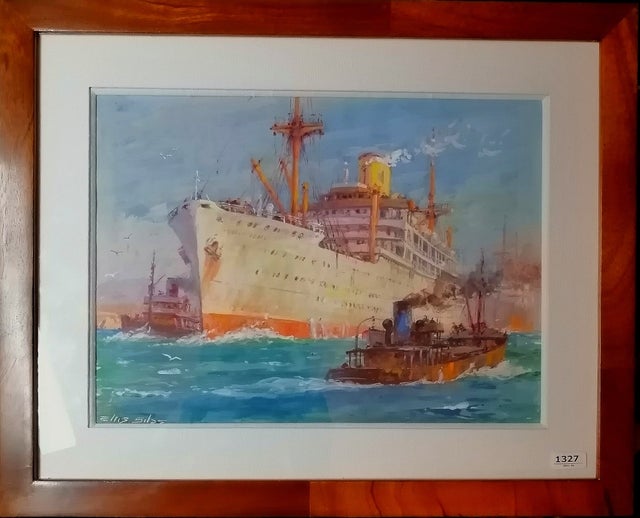 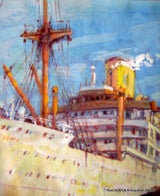 Watercolour and gouache on paper, signed. left under Ellis Silas.

Condition/Notes : Good. The watercolour and predominantly gouache study of a passenger-cargo steamship leaving port is in good condition with good colour. There is a vertical surface crease to the paper support on the hull forward of the bridge and to the rh side of the foremast near the mount edge, but these are not noticeable in normal viewing, and there are two vertical impression marks either side adjacent to the mount window from a previous smaller mount, again not noticeable in normal viewing. The study depicts a passenger-cargo steamship departing port with tugs in attendance; she is tentatively identified as ss Strathallan by the bridge design and other features. The painting is signed by the artist in the lower lh corner in his usual style; note the original black signature has been over-painted in white gouache. Displayed within a plain off-white mount in a contemporary gilt frame with non-reflective glazing; hardboard backing sealed with gummed framing tape. Screw-eyes attched.

The painting is a particularly striking work capturing the grandeur of the ship in a busy port location and typical of the style of this well-known listed British maritime artist.

﻿The S.S. STRATHALLAN was one of several large passenger ships built in the 1930’s by Vickers-Armstrongs of Barrow-in-Furness for the Peninsular & Oriental Steam Navigation Company of London – P & O. These vessels, for which basic details are shown below, were designed and built for the Australian service :

Builder and Year of Build Vickers-Armstrongs of Barrow – 1938

Bio ; Painter, stained glass artist and writer, son of the painter Louis Silas, was born in London. He studied painting with his father and Walter Sickert and is notable for his landscapes and marine studies. Was a war artist for the Australian government during World War I, one of his books being Crusading at Anzac. Also travelled extensively in Papua, featured in his volume A Primitive Arcadia. Member of UA, Ridley Art Club and London Sketch Club; showed with RA, ROI and RI, and had one-man shows at Fine Art Society and Hereford City Museum and Art Gallery, which holds his work, as does the British Museum. Lived in London