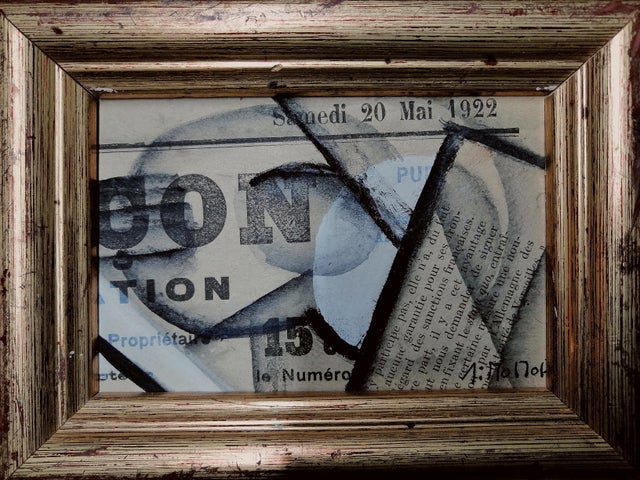 Popova was born into a wealthy family of Moscow factory owners, which secured her a quality art education. After studying in the studios of Stanislav Zhukovsky and Konstantin Yuon in Moscow from 1907 to 1909, she traveled to Italy, where she was strongly drawn to the monumental art of the early Renaissance. She then traveled to Pskov and Novgorod to study iconography. In 1912 Popova met some of the leading masters of the Moscow avant-garde gathered around Vladimir Tatlin, and for some time she worked at his studio, together with Nadezhda Udaltsova, with whom she was to develop a close friendship, and Aleksandr Vesnin (see Vesnin brothers). Popova, Udaltsova, and Vesnin developed close creative and personal friendships and love that would last throughout Popova’s short lifetime. During this period Popova visited Sergey Shchukin’s renowned collection of French art and, drawn to Cubism, traveled to Paris with Udaltsova. The Académie de la Palette, where Popova and Udaltsova studied Cubism with Henri Le Fauconnier and Jean Metzinger, was to prove a crucial step in Popova’s artistic development.

After another trip to France and Italy in 1914, Popova returned to Moscow as a full-fledged artist, her predilection and interest now centring on Art Nouveau. She organized “weekly gatherings on art” at her house, which attracted the forerunners of the Moscow artistic avant-garde, and participated in avant-garde exhibitions, such as Jack of Diamonds exhibitions of 1914 and 1916, “0.10” (1915),

The mid-1910s were a turning point for Popova. After successful experiments in Cubism (such as Composition with Figures, 1913), Popova created a series of “plastic paintings,” such as Jug on Table (1915), in which there is a synthesis of painting and relief work using plaster and tin. In 1916 she joined the Supremus Group founded by Kazimir Malevich. Inspired by Malevich’s ideas about abstraction and Suprematism (an art form he invented), Popova developed an individual variation of nonobjective art in which traditional principles were dynamically combined with the flatness and linearity of medieval Russian art and the most innovative avant-garde techniques. She classified her work, with its rhythmical syntheses of coloured planes, as “Painterly Architectonics.”

Popova’s painting gradually began to evolve into Constructivism; her compositions of the early 1920s bear titles such as Construction and Spatial-Force Construction. Thus, her departure from painting and her turn to “practical art” in 1921 was a logical step in her artistic evolution. During this period Popova connected teaching and theoretical work (at, for example, the Moscow Institute of Artistic Culture) while creatively she moved toward the applied arts, working with textile designs, posters, and book covers. Her most interesting work was in the field of set design. She created innovative Constructivist sets around which the action developed. She worked with the Kamerny Theatre of Aleksandr Tairov and Vsevolod Meyerhold. Popova died at the peak of her artistic powers two days after the death of her son, from whom she had contracted scarlet fever. No coa.