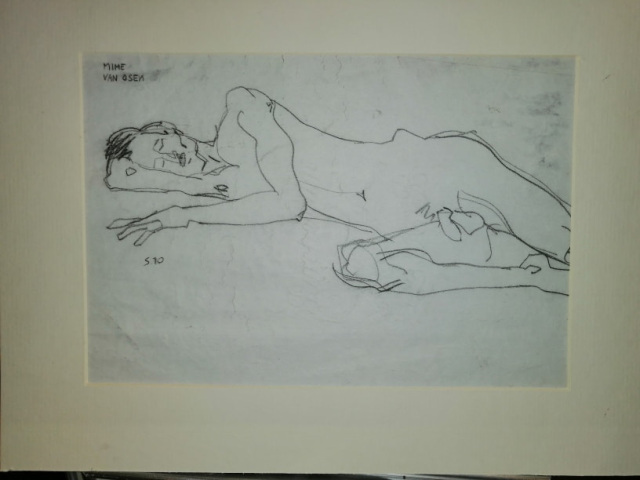 Egon Schiele 12 June 1890 – 31 October 1918) was an Austrian painter. A protégé of Gustav Klimt, Schiele was a major figurative painter of the early 20th century. His work is noted for its intensity and its raw sexuality, and the many self-portraits the artist produced, including naked self-portraits. The twisted body shapes and the expressive line that characterize Schiele's paintings and drawings mark the artist as an early exponent of Expressionism.

Schiele was born in 1890 in Tulln, Lower Austria. His father, Adolf Schiele, the station master of the Tulln station in the Austrian State Railways, was born in 1851 in Vienna to Karl Ludwig Schiele, a German from Ballenstedt and Aloisia Schimak; Egon Schiele's mother Marie, née Soukup, was born in 1861 in Český Krumlov (Krumau) to Johann Franz Soukup, a Czech father from Mirkovice, and Aloisia Poferl, a German Bohemian mother from Český Krumlov. As a child, Schiele was fascinated by trains, and would spend many hours drawing them, to the point where his father felt obliged to destroy his sketchbooks. When he was 11 years old, Schiele moved to the nearby city of Krems (and later to Klosterneuburg) to attend secondary school. To those around him, Schiele was regarded as a strange child. Shy and reserved, he did poorly at school except in athletics and drawing, and was usually in classes made up of younger pupils. He also displayed incestuous tendencies towards his younger sister Gertrude (who was known as Gerti), and his father, well aware of Egon's behaviour, was once forced to break down the door of a locked room that Egon and Gerti were in to see what they were doing (only to discover that they were developing a film). When he was sixteen he took the twelve-year-old Gerti by train to Trieste without permission and spent a night in a hotel room with her.

When Schiele was 15 years old, his father died from syphilis, and he became a ward of his maternal uncle, Leopold Czihaczek, also a railway official. Although he wanted Schiele to follow in his footsteps, and was distressed at his lack of interest in academia, he recognised Schiele's talent for drawing and unenthusiastically allowed him a tutor; the artist Ludwig Karl Strauch. In 1906 Schiele applied at the Kunstgewerbeschule (School of Arts and Crafts) in Vienna, where Gustav Klimt had once studied. Within his first year there, Schiele was sent, at the insistence of several faculty members, to the more traditional Akademie der Bildenden Künste in Vienna in 1906. His main teacher at the academy was Christian Griepenkerl, a painter whose strict doctrine and ultra-conservative style frustrated and dissatisfied Schiele and his fellow students so much that he left three years later.

In 1907, Schiele sought out Gustav Klimt, who generously mentored younger artists. Klimt took a particular interest in the young Schiele, buying his drawings, offering to exchange them for some of his own, arranging models for him and introducing him to potential patrons. He also introduced Schiele to the Wiener Werkstätte, the arts and crafts workshop connected with the Secession. Schiele's earliest works between 1907 and 1909 contain strong similarities with those of Klimt, as well as influences from Art Nouveau. In 1908 Schiele had his first exhibition, in Klosterneuburg. Schiele left the Academy in 1909, after completing his third year, and founded the Neukunstgruppe ("New Art Group") with other dissatisfied students. In his early years, Schiele was strongly influenced by Klimt and Kokoschka. Although imitations of their styles, particularly with the former, are noticeably visible in Schiele's first works, he soon evolved his own distinctive style.